Archive Noticeboard for Budleigh Salterton
A quote from the noticeboard:
"He told us the Anniss family name derives from a sailor in the Spanish Armada whose vessel was shipwrecked in the Bristol Channel. The family was first established in North Devon before relocating to Budleigh Salterton."

www.surnamedb.com says of the surname Annis:
"This interesting surname recorded as Annas, Annes, Annice, Anning, Annis, and others, is of either Irish or Anglo-Scottish origin."

However I have somewhere tree that suggests at least one Annis/Anniss family derives its name from a Portuguese merchant living in London in the early sixteenth century.

The image below is derived from sofeminine.co.uk.
Note that their estimate of the number of Annisses in England is less than the number in Devon! 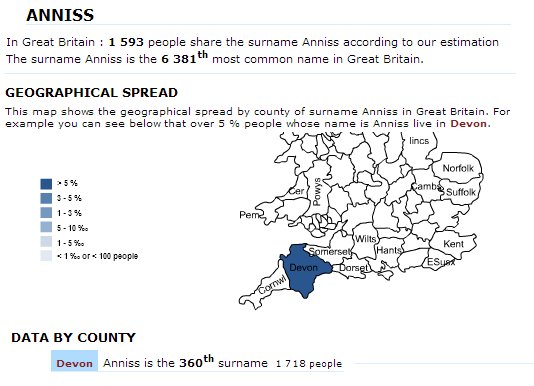