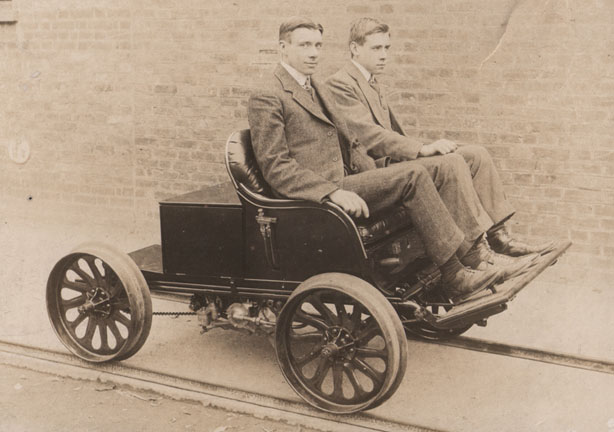 Caption on back reads:
Jim & Alfred Drewry
"in Rail Car invented by J. D. to measure Rail deflections over S.African railways - probably about 1912"

However given that Jim's birthday was 1883 and Alfie's 1888, I suggest the year should be earlier, possibly, 1902.
My Brother Bill says that Grandpa (the furthest from the camera) said he was sixteen when the photo was taken, which would make the year 1904.

Perhaps this is the car referred to in "Kaleidoscope of Shelvoke & Drewry" and described in Brian Carpenter's precis:
"Earlier he had founded the Drewry Rail Car Co., and claimed to be the originator of the petrol railcar, having run the line from Cairo to the Cape for a time, and having built his first machine at Teddington in 1902" (See James S. Drewry)
But the bit about "the line from Cairo to the Cape" cannot be correct since such a line was never completed. At the time it was certainly something which Cecil Rhodes had in mind.

Jim did go to Africa with a railcar in 1904 thru 1906. [See photos]. There is a picture of 'No.1 Trolley, 1904'. It is very different from the photo above, possibly re-engineered for rougher conditions

For a brief history of the SAR see A South African Railway History.

Sandstone Heritage Trust
"At Sandstone Estates in the Eastern Free State of South Africa there is a large steam locomotive workshop for narrow gauge railway, one of the world's most comprehensive collections of tractors and other agricultural equipment, together with a team of motivated, professional and dedicated enthusiasts to ensure restoration work is undertaken to the highest standards and skills are passed on to the next generation."

About 5 years ago, we communicated with people in South Africa and they promised to send copies of some of the documents they have available, for example a Drewry Sales catalogue. Unfortunately nothing came of this.